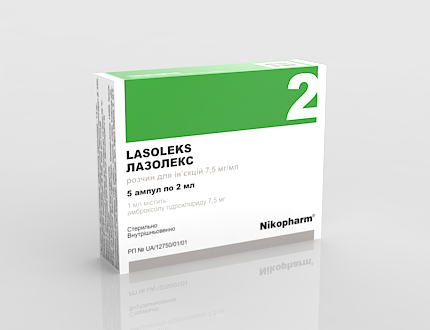 1 ml of the solution contains 7.5 mg of ambroxol hydrochloride;

Anti-oxidant effects of ambroxol were also reported during pre-clinical studies.

Ambroxol hydrochloride binds with plasma serum by 90% in  adults and by 60-70% in newborns. The product penetrates though placenta barrier and reaches fetus lungs. A high distribution volume (410 l) evidences about the fact that it accumulates mostly in tissues, rather than in plasma. Concentration in lung tissue is more than that in  plasma having ≥ 17 ratio.

Metabolism and excretion Ambroxol hydrochloride metabolizes mostly in liver through glucuronidation and in some cases it can be metabolized through decomposition to dibromanthranilic acid (almost 10% of the dose); other insignificant metabolites are also formed. Studies dedicated to the human liver microsomes showed that СYР3А4 enzyme contributes in metabolism of ambroxol hydrochloride to dibromanthranilic acid.. 3 days after intravenous injection, 4-6% of dose are excreted unchanged, while 35.6% are excreted in conjugated form with urine.

When product is administered among newborns, a half-live period upon repeated administration is almost doubled, which demonstrates clearance decrease.

Ambroxol penetrates through blood-brain and placenta barriers and is excreted into breastmilk.

The product is used to increase lung surfactant release among premature infants and newborns having respiratory distress.

Known hypersensitivity to ambroxol hydrochloride or to any other product components.

Several cases about acute  skin reactions were reported: Stevens-Johnson syndrome and toxic epidermal necrolysis (Lyell's syndrome) associated with the usage of expectorant drugs, as ambroxol hydrochloride. They could be explained by severe character of the main disease or by simultaneous intake of another product. Therefore, if any dermal or mucous reactions appear, discontinue the use of the product and obtain medical treatment immediately.

Since ambroxol can increase mucus secretion, Lasoleks, solution for injection, should be used with due care in case of bronchial motility disorders or increased mucus secretion (for example, at such rare disease as primary ciliary dyskinesia).

Lasoleks, solution for injection, should be used with due care among the patients having renal disorders or severe liver disorders (either by increasing an interval between administrations or by reducing the dose).

Metabolites accumulation in the liver is likely to happen among the patients having severe renal dysfunction.

The simultaneous intake of Lasoleks, solution for injection, and cough-suppressive products may cause excessive mucus accumulation due to cough reflex suppression. Therefore, such combination is possible only upon detailed evaluation by the doctor of the expected benefit and possible risks.

Since ambroxol can increase mucus secretion, Lasoleks, solution for injection, should be used with due care in case of bronchial motility disorders and increased mucus secretion (for example, at such rare disease as primary ciliary dyskinesia).

Lasoleks should be administered with due care among the patients having renal dysfunction or severe liver disorders. When ambroxol, as any other active ingredient being metabolized in liver and being excreted by kidneys, metabolites accumulation in liver is observed among the patients with the severe renal failure.

The following very rare dermal reactions are observed: Stevens-Johnson syndrome and Lyell's syndrome (toxic epidermal necrolysis (TEN)) associated with the usage of ambroxol hydrochloride. They could be explained by severe character of the main disease or by simultaneous intake of another product. Therefore, if any dermal or mucous reactions appear, discontinue the use of the product and obtain medical treatment immediately.

Lasoleks, solution for injection, contains less than 1 mmol (23 mg) of sodium per ampoule.

It was proven that the most effective daily dose is 30 mg of ambroxol hydrochloride per 1 kg of body weight.

Dilute 1-6 ampoules in 250-500 ml of natural saline solution or Ringer solution directly before use. Use the obtained solution within 6 hours after its preparation.

The treatment should last within 5 days.

Instruction for use of  ampule.

1. Separate one ampoule from the block and shake the contents gently, holding the ampoule by its neck.

2. Squeeze the ampoule in your hand (the product leakage shall not occur) and remove the cap by rotating it.

3.Immediately put a syringe in the ampoule through the obtained hole.

4.Turn the ampoule over and slowly suck the liquid in the syringe.

5.Put a needle on the syringe.

No data reported about specific overdose symptoms. The symptoms which are observed at the typical overdose or in case of medical error are similar to the known adverse reactions in recommended doses and may require symptomatic treatment.

To evaluate adverse reactions, the following classification was used:

General disorders and pathological events in the administration site:

Discard the unused ampoule’s contents. Do not store for the further use.

Store in original package at the temperature not above 25 ºС.

Keep away from children.

Lasoleks should not be mixed with any medicines, unless specified in section “Posology and method of administration”.

Do not mix with other solutions, since it can result in the mixtures having pH of more than 6.3 and ambroxol hydrochloride precipitate as free base may be formed as the result of high pH.

Sorry, this entry is only available in Russian and Ukrainian. For the sake of viewer convenience, the content is shown below in one of the available alternative languages. You may click one of the links to switch the site language to another available language.Повышенный риск легочных осложнений в послеоперационном периоде отмечается у пациентов с хроническими заболеваниями дыхательных путей, к...
END_OF_DOCUMENT_TOKEN_TO_BE_REPLACED